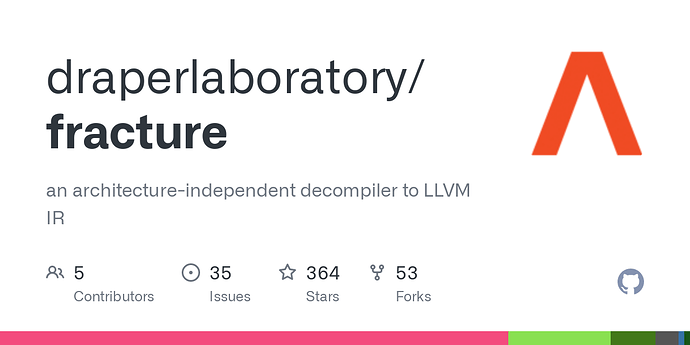 GitHub - draperlaboratory/fracture: an architecture-independent decompiler to...

an architecture-independent decompiler to LLVM IR. Contribute to draperlaboratory/fracture development by creating an account on GitHub.

I wonder if they have been in contact with anyone in the community in getting this upstreamed. Does it look interesting to anyone else? (thoughts/random comments/feedback)

I saw fracture but I was unable to figure out how to get even a small
portion of x86 machine code decompiled to IR. That was several weeks
ago and it looks like the project has progressed quite a bit.

Other projects:
https://github.com/libcpu/libcpu (tried this one a long time ago, also
couldn't get any decompilation)
http://dagger.repzret.org/ (they finally released some source! One of
the devs presented at a LLVM meeting)

I am definitely interested in seeing a production-quality decompiler!

I may be mistaken, but I thought in their README or docs it explicitly stated x86 was a future goal and not working yet. So it's possible that you just tried something which isn't supported.

Very cool, I just tested out dagger with a small x86_64 test and it
worked! You can see my test and the decompiled IR here:
https://gist.github.com/jevinskie/9957869

For completeness, I want to mention that there is a commercial effort (by SecondWrite LLC) to build a production-quality decompiler (also called SecondWrite [1,2]) that targets the LLVM intermediate representation. It is a very ambitious project and a high level of compatibility can only be offered after substantial implementation and research efforts have been made. I’m adding a SecondWrite developer, Kapil Anand, to the loop in case you want to start a conversation directly. As an independent researcher in compilation and security, I can attest to the quality of the work and research that has gone into the development of SecondWrite.

Is it open source? Do they plan to work with upstream? Commercial products are fun, but my original post was about a project that had pushed the source to github. I was hoping to have it get some attention or upstream to notice people are interested.

SecondWrite is not open source. My intent was to bring attention to the scope and difficulty of writing a production quality decompiler and to put the SecondWrite people in the loop–not to sidetrack the discussion