Does poison add implicit "definedness" under the hood ?

First of all, great job on your talk!

This is a question I guess you’d be the best person to answer but the rest of the LLVM community might want to participate.

I was thinking about a UB-related example that has been discussed by multiple people
(including you), all of them basically authors of this paper (https://www.cs.utah.edu/~regehr/papers/undef-pldi17.pdf):

The reasoning here, is let’s make signed wrapping deferred UB that will only
occur if the value is used in one of X ways (e.g. as a denominator). To that end, if
n == 0 and x == INT_MAX, UB will never occur because the value is never used.

But, by doing that, the first point is:
If we translate this into machine code, the signed wrapping will happen, no matter
the value won’t be used.

Now, imagine that on some platform P, signed wrapping explodes the computer.
The computer will explode (should explode ? more on that later)
even if n == 0, something that would not happen in the original code.

So, to justify this transformation as correct, implicitly, poison has
added definedness to signed wrapping: specifically, that the
computer won’t explode if SW happens. AFAIU, that is ok as far as C++ semantics
are concerned:
Since signed wrapping was UB, making it more defined is ok.

But that definedness now has created a burden to whoever is writing a back-end
from LLVM IR to P (the SW exploding platform).
That is, now, if they see a add <nsw>, they can’t lower it to a trivial signed add,

since if they do that and x == INT_MAX, the computer will explode and that violates
the semantics of LLVM IR (since we mandated that SW doesn’t explode the machine).

Instead, they have to lower it as something like:
if (x == INT_MAX)
skip or whatever

Is this whole thinking correct ? UB, undef and poison all are very subtle so I’m trying
to wrap my head around.

So, to justify this transformation as correct, implicitly, poison has
added definedness to signed wrapping: specifically, that the
computer won’t explode if SW happens. AFAIU, that is ok as far as C++ semantics
are concerned:
Since signed wrapping was UB, making it more defined is ok.

Your understanding is correct. Since signed overflow is UB in C/C++, lowering from C to IR can make such programs more defined.

Instead, they have to lower it as something like:
if (x == INT_MAX)
skip or whatever

Yes.
This means that the overflow check and the actual add operation can be separated. This requires instruction selection to carefully combine the check and add, but for optimization this is beneficial because add can still be freely moved.

I think I lost you in your last example. First, I’m not sure if this last C code corresponds to LLVM IR code or after-LLVM-IR code. Assuming that we’re talking about LLVM IR and for my imaginary platform P:
The checking for overflow is not something that we have to do in LLVM IR, since as outlined in my previous email, LLVM IR has added the semantics that
signed overflow does not explode / trap (because if it didn’t add these semantics, additions that exploded and which did not happen in the original program will happen now etc.). It is the lowering of LLVM IR that has to add it.

Now, we get that after and go ahead to lower it (i.e. after-LLVM-IR, back-end work). I’ll actually try to do a better job than
my original email:

int tmp;
if (x != INT_MAX) ← notice the !=. This check is to guarantee that the addition won’t explode / trap since if that happened, it would violate the semantics, that we implicitly added, of LLVM IR.

So this (your example):

does not make sense to me either in the LLVM IR level or in the after-LLVM-IR level. For the former, it doesn’t make sense since I don’t see why we have to do the check inside the loop;
the semantics mandate that it doesn’t happen so we’re ok, the burden is on the back-end. For the latter (i.e. we’re in LLVM IR lowering, ISel or smth), we simply can’t hoist this add outside without a check
since if x == INT_MAX, the platform P will explode immediately, no matter what the value of n (and of course, if n == 0, the original code wouldn’t explode).

Do I miss something ?
Guess: I think that what I miss is this: The semantics we added is not that signed wrapping won’t explode. Rather: It does not explode if it is not used in one of the X ways. That would justify
your example transformation in the LLVM IR level.

I hope this was not confusing, thanks for your time!

Okay, previously I was assuming that P has two kinds of additions (trapping add & silent add).
Maybe this isn’t true, and P always traps when overflow happens? I hope my understanding is correct now.

There is add without nsw in IR, and the backend should still put overflow check when lowering it.
If add nsw raises UB, dropping nsw from add will make the instruction more costly, so optimizations that drop nsw should be done more carefully.

If we keep add nsw poison, lowering add nsw needs check, but the generated code is slightly different from add:

In case of add x, y without nsw, z should be 2’s complement otherwise.

In perspective of optimizations, add nsw is still different from add because it allows simplifying more expressions using arithmetic properties.

But, dropping nsw will make the instruction expensive (as the UB case), so it should be carefully done as well.

If clang explicitly inserts the overflow check in IR (either in if or llvm.assume), I think that can be a good hint for code generation.
Code motion of adds should be more carefully done though, because the hint might be missed.

Okay, previously I was assuming that P has two kinds of additions (trapping add & silent add).
Maybe this isn’t true, and P always traps when overflow happens? I hope my understanding is correct now.

Exactly, P has only one add that explodes on overflow. (btw just to be clear, the point is
not P - P was just introduced as an example to showcase the implicit semantics that poison adds).

I think I understood most of what you said above. My point was not so much nsw vs dropping nsw but in
any case, IIUC, dropping nsw is only bad since it only disables using arithmetic properties and their
codegen is the same.

If we keep add nsw poison, lowering add nsw needs check, but the generated code is slightly different from add:
…
I’d think that this is the codegen of both add nsw and simply add. They both have to check whether there is overflow.

In case of add x, y without nsw, z should be 2’s complement otherwise.
I’m not sure I got that, but if P only supports 2’s complement arithmetic anyway, that means that the codegen of the two (add and add nsw)
is identical right ?

I think it is slightly different, let me explain the reason.

Lowering z = add nsw x, y into the following assembly is valid, but z = add x, y into this isn’t.

Lowering z = add x, y should be more ‘precise’.
Instead of storing zero, 2’s complement of x + y should be stored. This can be more expensive. 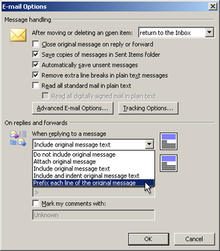 When a message is replied to in e-mail, Internet forums, or Usenet, the original can often be included, or "quoted", in a variety of different posting styles. The main options are interleaved posting (also called inline replying, in which the different parts of the reply follow the relevant parts of the original post), bottom-posting (in which the reply follows the quote) or top-posting (in which the reply precedes the quoted original message). For each of those options, there is also the issue ...

That’s the first time someone notifies me about this. It seems Gmail does it by default, not sure if I can change it.

llvm-dev has no policy against top posting. This is just Shawn expressing his personal preference.

Aha, thanks for letting me know.