I pushed two patches (D55577, D55579) to phabricator this week, which update the OMPT interface definition to what is finally defined in the OpenMP 5.0 spec.
It would be great to get these patches into 8.0, as this would be the point where tools can implement against a stable interface in a released runtime version.

These patches only contain the interface changes and direct necessary code changes, but do not at the new functionality introduced since TR6.

Although, we started to implement several patches we currently don't have the resources in Aachen to push on these patches (t least for the next months).
The implementation can be found at: 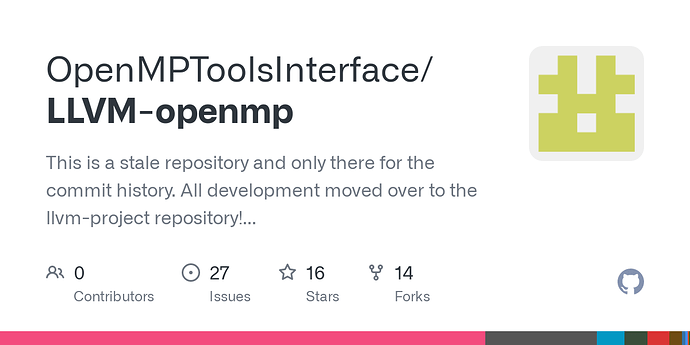 This is a stale repository and only there for the commit history. All development moved over to the llvm-project repository! Was: LLVM OpenMP runtime with experimental changes for OMPT (Preview of ...

task_memory_tr7:
- test case has issues when icc-18 is used for compiling the test

dependences_callback_tr7:
- implementation is at an state of early specification idea, so needs update towards the final specification

update_types_tr7 (superseeded by the patches in phabricator)

Would be great if someone picks up here