In current state dates at small version of pictures generated by night
builder script is unreadable
( for example http://llvm.cs.uiuc.edu/testresults/X86/running_loc.png ).

I suggest rotate it to vertical position in small picture versions. 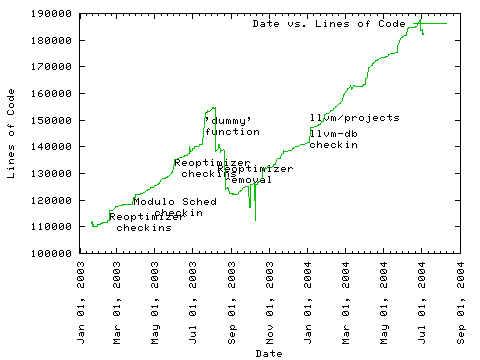 Change the "rotate by 90" xtics specification to just "rotate" which is
equivalent. The "by <angle>" syntax is not acceptable for all output
devices. Apparently the Sparc and x86 output devices (no color) don't
accept this, but should accept the plain "rotate".

Sorry, i must be more careful if i proposed patches.

Thanks for the offer of dilligence, but there's not much you could have done unless you had Sparc, PPC, and Linux x86 systems to try it on. In general, patches that work on one platform but break on alternate platforms are relatively easily forgiven because none of us outside UIUC have multiple machines to test on.

So, don't worry about it .. not like you broke a major piece of LLVM, just the nightly tester