Recently I discovered that OCaml is/was one of the most "ideal"
languages in relation to code-length:performance ratio. 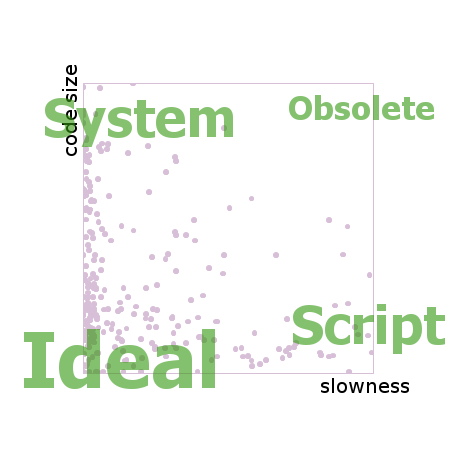 The speed, size and dependability of programming languages

The Computer Language Benchmarks Game is a collection of 429 programs, consisting of 13 benchmark reimplemented across 33 programming langu...

(contacted him to update his scripts to see if that's still the case).

Found the LLVM OCaml tutorial, which got me quite excited.
Unfortunately it does not work with the current version of LLVM/OCaml.

I asked around on IRC, and Whitequark was able to help me get the
initial bits compiling again. However there still seems to be some
bugs before it will fully function.

As you may know the source code for the whole thing is available at:
http://llvm.org/docs/tutorial/OCamlLangImpl7.html

So far have had to modify
file _tags
to include a line:
true: package(llvm)

can view my version of the sources at:
http://mkaw.tk/lang/kalsco/ocaml/

Hopefully in the coming days, or weeks can get this sorted out.
I'm willing to test ideas for solutions, and report back.
The maintainer could update the tutorial once there is a solution.
I'd recomend having a zip or tarball available, at the end,
so people can more easily download and test Kaleidascope (kalsco),
with some kind of open source license perhaps.

Anyways, I would really love to be able to implement my language in
OCaml LLVM, as it has to parse human-like language. Hope you can help.