>/ I'm contradicting my stance above about not caring about the
/>/ implementation :), but is MurmurHash a good hash for string data?
/>/ The Bernstein hash function works really well and is much cheaper to
/>/ compute than Murmur. It is used by HashString (and thus by StringMap).
/

If you want a good string hashing function, CityHash is by a fair margin
the best one out there. Look at the comparison done by Craig, Howard, and
several others when discussing what hashing function to use for libc++.

The only downside to CityHash is code size. It is heavily tuned, and that
results in several special case routines to get maximal efficiency and hash
quality for short strings (yep, not just huge ones). That said, the code
size increase was measured carefully for libc++ and it's really quite small.

What about machines that are big endian, 32-bit, or less optimized for unaligned
accesses than x86? From 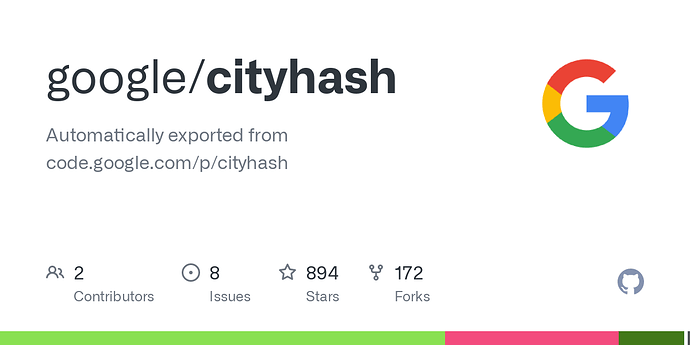 1) The current version of CityHash is intended for little-endian 64-bit CPUs.
Functions that don't use the CRC32 instruction should also work, slowly,
in little-endian 32-bit code. CityHash should work on big-endian CPUs as well;

I ported CityHash about a year ago to a niche research architecture that is all
three of the above, and found that the byteswapping and unaligned loads
killed performance (the target only supports naturally aligned loads).

It's quite possible that x86 is the only target we care about in terms of
compile time performance, just wanted to see if CityHash had since been generalized
to work well on less general-purpose-focused targets, or if there was
something else I was overlooking when I did my initial experiments.