“Parse input files” is the major bottleneck in a link. lld should improve this aspect to be faster.
Why isn't ld.lld faster? | MaskRay has some statistics.

Here are some insights on making symbol initialization and resolution parallel:

More concretely, I think we need these changes in order:

With these, “Parse input files” should be noticeably faster.
I will strive to keep the relocation refers to a symbol in a discarded section diagnostic (⚙ D59649 [ELF] Improve error message for relocations to symbols defined in discarded sections), but there is a non-zero probability that we may lose it in the default mode if it does not fit into parallelism well (hurt performance too much).
If it turns out to be too slow, perhaps add an opt-in option for it.

Then think about parallel initialization of non-local symbols.
This part is largely under-specified.

There are two main things.

Second is how to parallelize file parsing.
Every input file has a priority (relocatable > shared = lazy).
When iterating over its symbol table, consider whether its entry has a higher priority than the existing global symtab entry. If yes, overwrite some properties.

CC @int3 and @oontvoo for LLD for Mach-O

Thanks for cc’ing - (I haven’t followed Discourse closely :))

I’ve been chatting with maskray about this for sometime. From my current experiment with parellising input parsing for macho (ie., similar to the what the current ELF’s ObjFile::parse does), the result does not seem very good. The implementation is quite simple at the moment - simply have all the macho::InputFile delay populating SymTab - but instead, just parse the membufs in parallel and store the temporary Symbols’ state, then after everyone is done, populating the symboltab serially.

One of the concern right now is the allocator. (Current bump allocator isn’t thread safe, and switching to simple malloc or even TCMalloc seems to slow things down by ~13-20%, depending on the applications). However, I believe we can do some nfc refactoring in InputFile to ensure it doesn’t allocate memory in the ctor call. Perhaps that could work.

Another thing is that the cost of storing temporary symbols’ state before resolution is high. (maskray suggested interning the symbols - which i’m exploring)

(Simple sketch of my “ideal” goal is 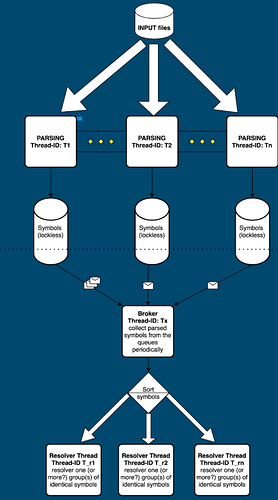 Any ideas how this could map to PE/COFF? I haven’t studied the format that deeply but I know we could benefit if the linker could be made faster.

However, I believe we can do some nfc refactoring in InputFile to ensure it doesn’t allocate memory in the ctor call. Perhaps that could work.

Or we could make a thread-safe bump allocator

It seems like a generally useful thing to have in LLVM…

int3:
Or we could make a thread-safe bump allocator

It seems like a generally useful thing to have in LLVM…

I feel those two topics point out again the lack in LLVM of thread-safe, lock-free containers & memory allocator. This boils down to the question of whether we should reference or vendor external packages from LLVM. Right now it seems that only “optional” external libs are referenced by LLVM, and any “required” external library has to duplicated/vendored in the monorepo (and inherently fit the LLVM licence).

Writing a cross-platform, lock-free allocator isn’t trivial (although we have SCUDO), and nor is re-writing all the common containers (map, vector, deque, etc) in a thread-safe, lock-free manner.
If we could rely on IntelTBB, that would solve both raised issues (since IntelTBB has tbbmalloc). Adding in mimalloc or rpmalloc would further improve the situation.

Would it be an option to let LLD rely on external submodules?

Would it be an option to let LLD rely on external submodules?

Popping in here and don’t intend to distract from the LLD discussion much, but the desire for these lock-free/thread-safe structures is not specific to LLD. MLIR heavily relies on threading and the use is growing. Just want to make sure to keep context that the desired features here are not specific to certain sub projects.

I created a new post for the library shortcoming: Parallel/thread-safe algorithms, allocators, and containers We can move these discussions there:)

For the ELF port, symbol resolution is still sequential, but otherwise quite a large portion of input file parsing has been made parallel. Major patches

with lots of minor refactoring.