Python3 compatibility for the API

I’ve only ever tested the Python 3 support on Windows, and I’ve only tested 3.5 and above, but I don’t expect any major difficulties getting it working on another platform, although you may need to tweak the CMake a little bit to get it building on your platform if it’s not Windows. Please try it and let me know how it goes.

What OS and minor version are you planning to use?

Great to hear! I was trying it out on Ubuntu 15.10 (which has lldb 3.6.2), and it seemed that the relevant modules were only installed with the Python 2 packages. Is it an installation issue on my side, or did 3.6.2 not have your changes yet? I can always install a newer version of lldb if it’s simply too old.

3.6.2 should be new enough, Python 3 has been working for over a year and it’s actually the only supported configuration right now on Windows. Most likely the problem is just that I never updated the build system to work with a platform other than Windows. Unfortunately, being that I work primarily on Windows, I’m probably not the best person to fix this, but if you want to take a stab at it I can give you some pointers to put you in the right direction.

Hmm…sure? I can try. Feel free to send me any tips.

It does show syntax errors when trying to import the existing lldb module in Python 3, however.

Right, the existing version that is built and what you are using links directly against a 2.7 libpython at compile time. So you would probably need to build LLDB from source and tweak the build system to make it possible to link against your 3.x version of python. There’s some build instructions on the website. I know there’s a few linux developers around here, so it’s possible someone else would be interested in making this work as well, but I don’t know that it’s on anyone’s immediate timeline.

In any case, if you want to try it yourself, the first step would be to get a working build (even with 2.7), and once you have that working we can look at how to make it link against Python 3.

We don't have any immediate plans to make lldb work with python 3 on
linux. However, I would be willing to guide you through making that
work. As Zachary pointed out, it should be fairly simple, given that
it already works on windows.

I don't think you'll be able to avoid building your own copy of lldb,
so I think you should start by making sure that you can build a
working lldb trunk with python2. Then we can figure out how to get
python 3 working.

BTW, linux support in lldb 3.6 was still quite flaky. I'd recommend
going at least to 3.8 to get a more stable experience.

Right, the existing version that is built and what you are using links
directly against a 2.7 libpython at compile time. So you would probably
need to build LLDB from source and tweak the build system to make it
possible to link against your 3.x version of python. There's some build
instructions on the website <http://lldb.llvm.org/build.html&gt;\. I know
there's a few linux developers around here, so it's possible someone
else would be interested in making this work as well, but I don't know
that it's on anyone's immediate timeline.

We build lldb against python3 regularly, because - as Zachary said - this is the only way to get scripting support on windows. To link against python3 on Linux you *should* just need the correct headers installed, and invoke CMake with the correct python path. For Ubuntu:

*should* give you everything you need. However, you may see that cmake picks up the python3 interpreter correctly, but tries to link against the python2.7 library.

This appears to be due to a problem in LLVM's CMakeLists.txt specifying support for 2.7 only. I have a patch to fix the issue awaiting review [here](https://reviews.llvm.org/D20825) which should fix the issue on Linux when multiple pythons are installed. It may be worth applying this patch locally and see how you get on.

I just built lldb on Ubuntu 12 with Python 3.5.1. I needed to set python includes, python library and python executable in cmake.

I found a problem with the tests - most ran fine, but I got errors with tests that tried to use pexpect, like TestConvenienceVariables.py.
File "/local/scratch/ted/8.1/llvm/tools/lldb/third_party/Python/module/pexpect-2.4/pexpect.py", line 82
except ImportError, e:
^
SyntaxError: invalid syntax

If we want to run the tests with Python3 we'll need to update pexpect.

Sounds great, I am glad to hear python3 is working on linux as well.

As for pexpect, could we just make sure our own copy of pexpect is not
on the path in this case, and have the user install a
python3-compatible version via usual means (apt-get install
python3-pexpect, in case of ubuntu).

Both python3.6 and python3.9 are not worked under the MSYS2 environment.

That’s not a python problem. That’s opt returning an error code. Try run the opt program with the arguments on the next to last line there and see what error it reports. 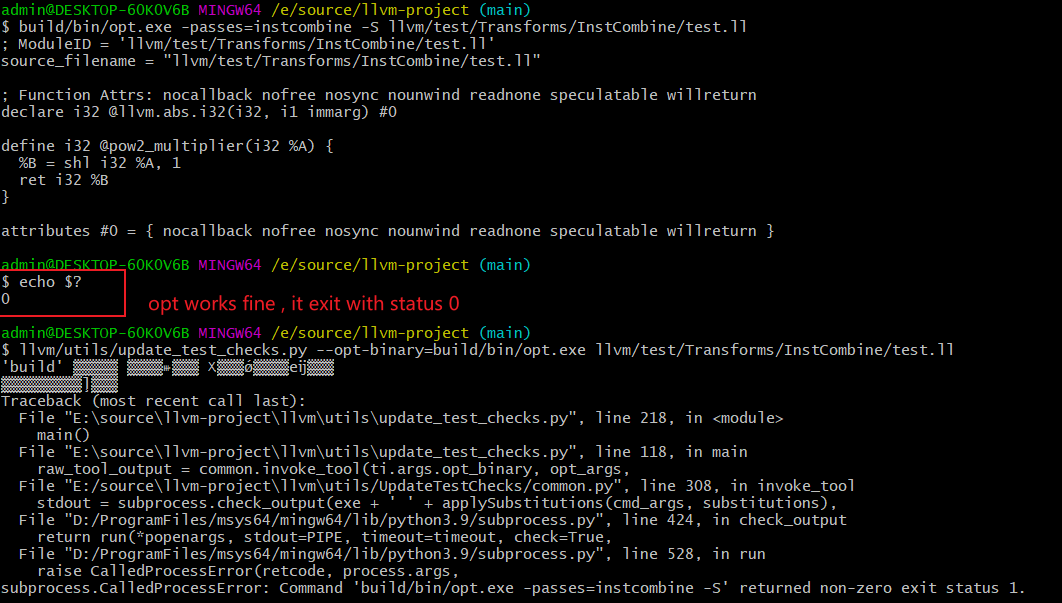 In any case I don’t think this is related to Python3 - so please post a new post with this specific issue.

ok, thanks your suggestion.

the new issue: [update_tet_checks] Don't work on under the MSYS2 environment